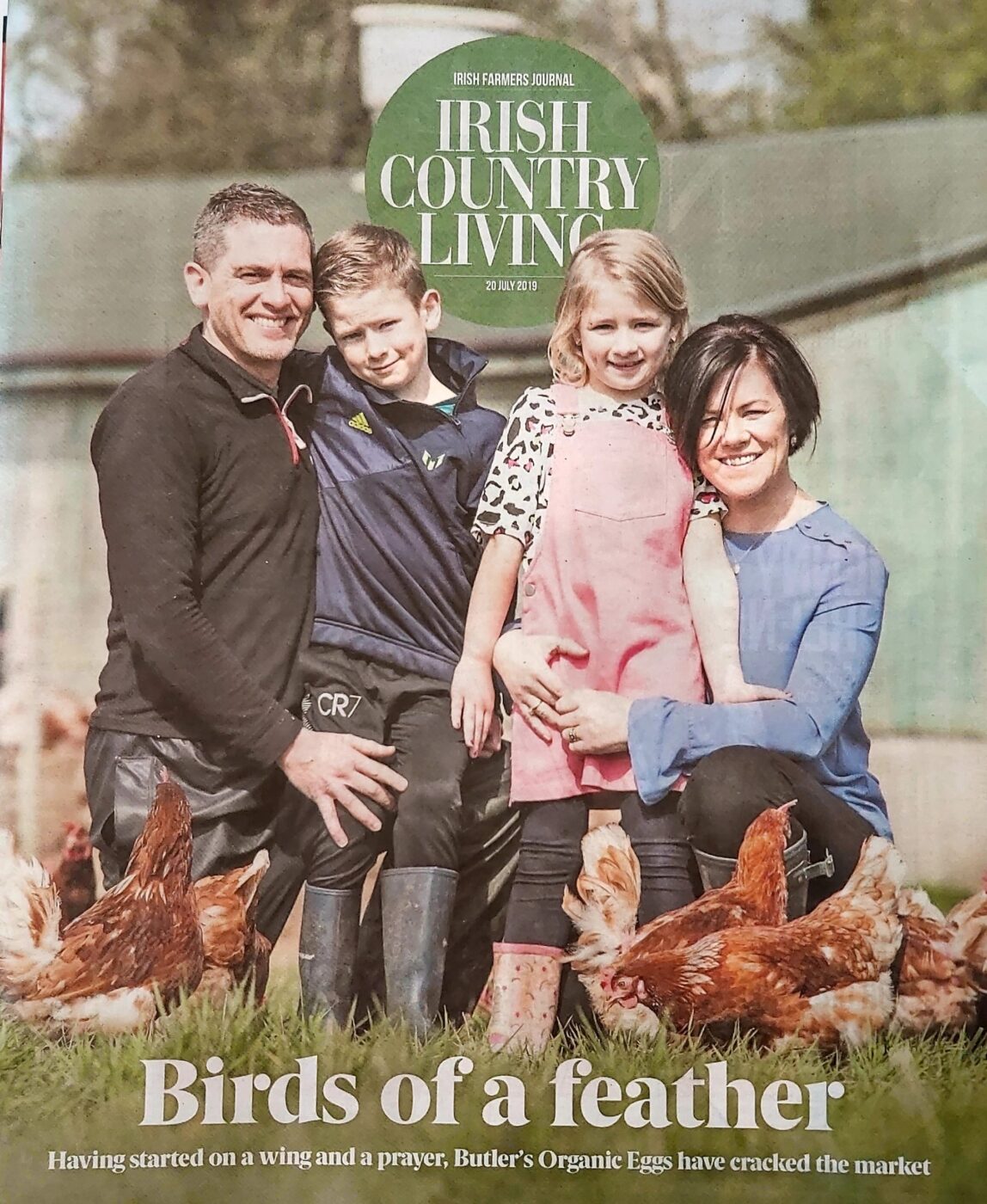 Having started on a wing and a prayer, Butler’s Organic Eggs have cracked the market. While Paula Butler is originally a “townie” she admits that she always had a soft spot for the farmers. Though when it came to meeting her now-husband David she wants to make it clear just who chased who.

“I worked in the local pub, so he pursued me there for a while”, she laughs. “Delete that!” jokes David, pointing at the dictaphone. (Sorry it’s on record now.) Still, no matter who spotted who first, there’s no doubt it was the start of a strong partnership that is now driving their business, Butler’s Organic Eggs, since Paula left her full-time job to join David on the farm full-time.

The couple live in Coolmanagh, just outside Hacketstown in Co Carlow, which was originally David’s fathers someplace. However, he was actually raised in Bray – but would escape to the country any chance he got.

“I used to love coming down here,” says David, who went to agricultural college in Multyfarnham after school, and originally started in sheep farming in the early ’90s.

However, he also continued to work in Dublin as a cable technician (“a double life”) and gradually rose up the ranks to management.

“I spent me days in an office with lads under me and I hated it,” he explains. “It wasn’t for me. So I was trying to think of ideas to get out of there all the time.”

As a child, David’s father had an egg round and he always had fond memories of going out on deliveries with him. Whether that planted the seed or not, he felt there was a gap in the market for organic eggs and after doing his research, left his job in 2007 to pursue his idea – even if his friends could not quite get their heads around it.

“They did think I was mad to give up because it was a decent job, company car, phone, everything that people rave about,” he admits. “And they used to say: ‘You want to do eggs?’”

One person who never doubted him, however, was Paula. Brought up in Hacketstown, but with relations in the country, she remembers David visiting his family’s farm when they were growing up (so maybe she did, in fact, have eyes for him first?), but they only started going out when she was in her Leaving Cert year.

She also worked in the capital for a time with the City of Dublin VEC in administration and computing, before moving to the Institute of Technology Carlow, where she worked in HR and later communications and public relations. But when David announced that he was going to start the egg business, she felt sure that he would succeed. 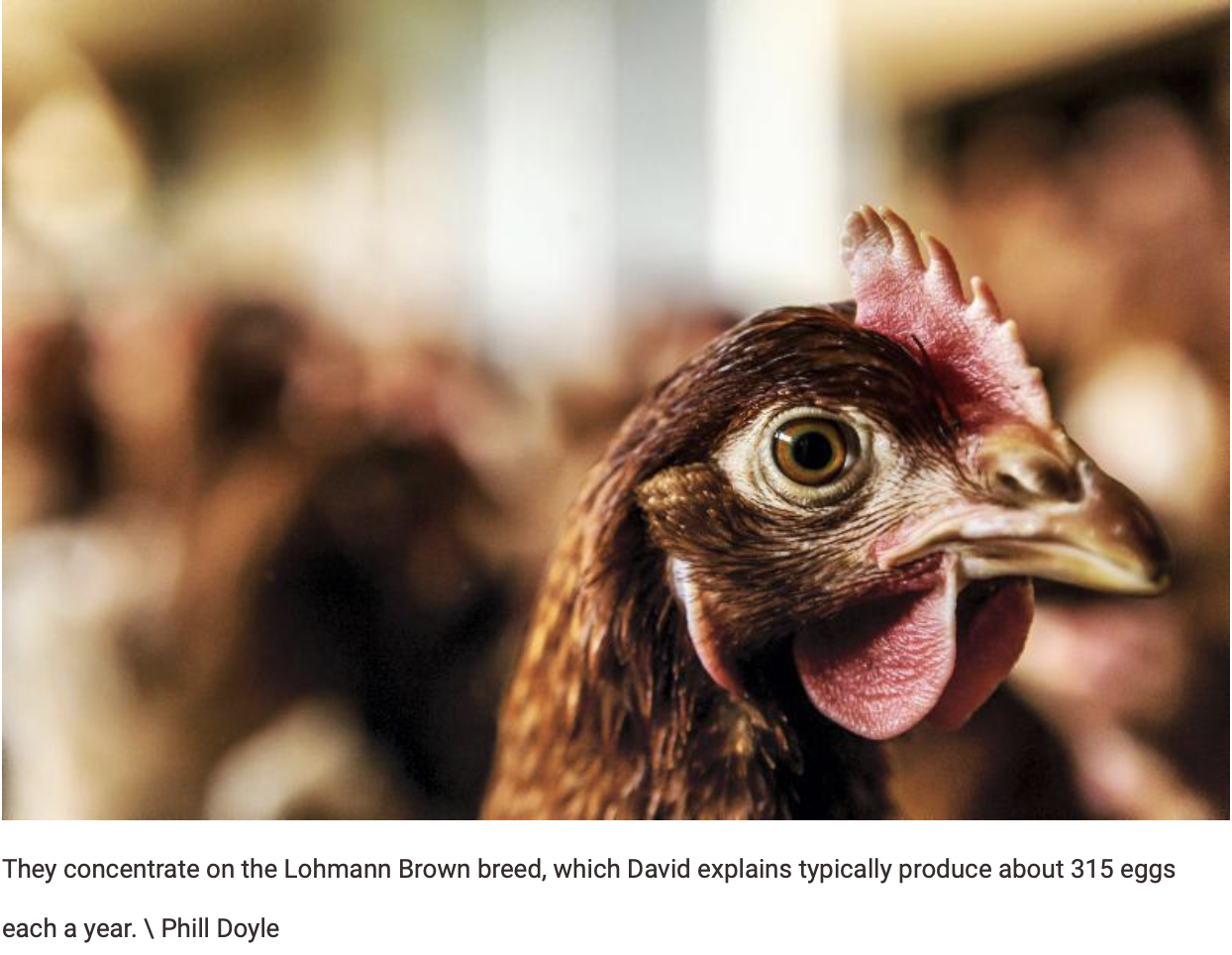 “I never had any worries about it,” she explains, “because anything he ever did, he just went off and did it.”

Not that the journey was without its challenges. With support from AIB, David originally trialled the business by buying in 250-day-old organic chicks, which he reared himself in a shed at the back of the house to “laying point”, before buying in another 250 layers.

“Then they put them into the shop, then the other Avocas heard of me, they took them, then other shops – because Avoca is Avoca – when they heard they were in there, other shops started contacting me and it kind of snowballed,” says David, who now produces about 1,400 dozen eggs a week, with about a third of the deliveries handled by distributor, Dillon Organics.

Of course, this demand has meant expanding the flock to 3,000 birds at any one time, with a fully automated feeding and egg collection facility: with the Butlers investing about €250,000 in the business to date, though they did benefit from the organic capital grant that covered 40% of the building and equipment costs.

They concentrate on the Lohmann Brown breed, which David explains typically produce about 315 eggs each a year.

“So we get them in at 17-weeks-old and they start laying at about 20 weeks old and we keep them in here for a year, so they’re 72-weeks-old when they’re finished laying,” he says of their system.

As members of the Irish Organic Trust, the Butlers have committed to certain principals, including having extra space for the birds to scratch around, nest, eat and drink. They are also reared on an organic diet – including organic pellets sourced from WCS Pedigree Feeds in Baltinglass – while there are regular inspections to maintain high standards; for instance, their packing house has to meet the same level of a meat production facility. 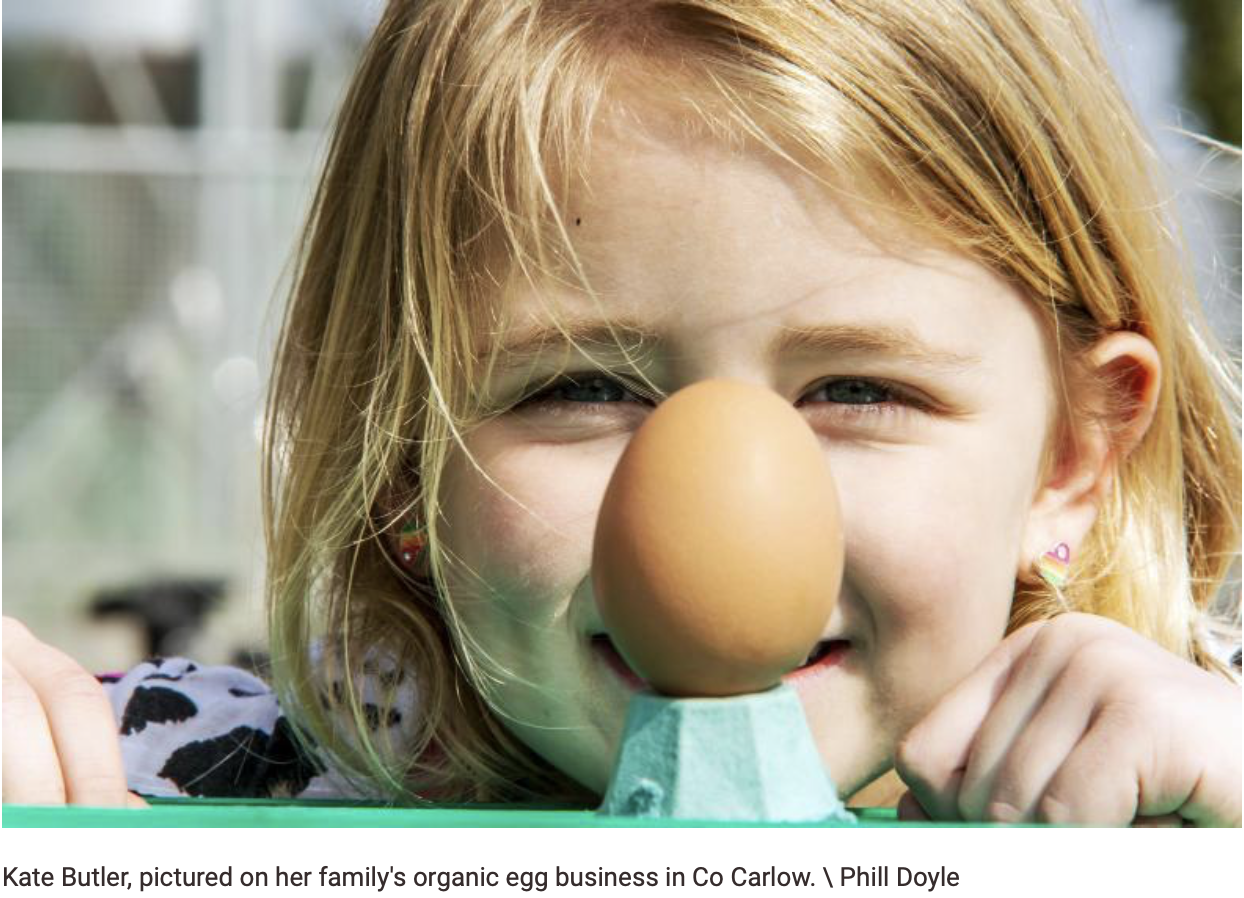 However, they believe it’s worth the time, expense and effort as if the birds are upset in any way, production can drop dramatically; for example, during the heatwave last year, their average lay of 90% dropped to 45%.

“If the hens are happy and they’re not stressed, they’re going to perform better for you, you’re going to get a better product,” says David, who also employs two part-time staff.

Indeed, in recent years, the Butlers have been unable to keep up with the demand for the eggs, which meant that they had to look at expanding again. And as the business grew, so did their family, with Noel (now eight) followed by Kate (seven) – plus 11 pets.

Paula continued to work in her role at IT Carlow while supporting David from the sidelines, but last year she decided that the time was right to come on to the farm full-time to help bring the business to the next level.

“I’d been in the education system for 23 years and I just couldn’t see myself there ’til I was 65 and most people don’t have an option where they can leave a permanent, pensionable job,” she explains of her decision to take a career break.

“I just felt for David, it’s too much for him to do all the business side, all the inspections, all the marketing, sales, everything on one person. So I could see the difference in him from the very beginning when he was ‘living the dream’ to every single day there’s something you have to be thinking about, so even when we go away or we do anything, the pressure was all on him. So I was kind of saying: ‘I could bring something to the table.’” 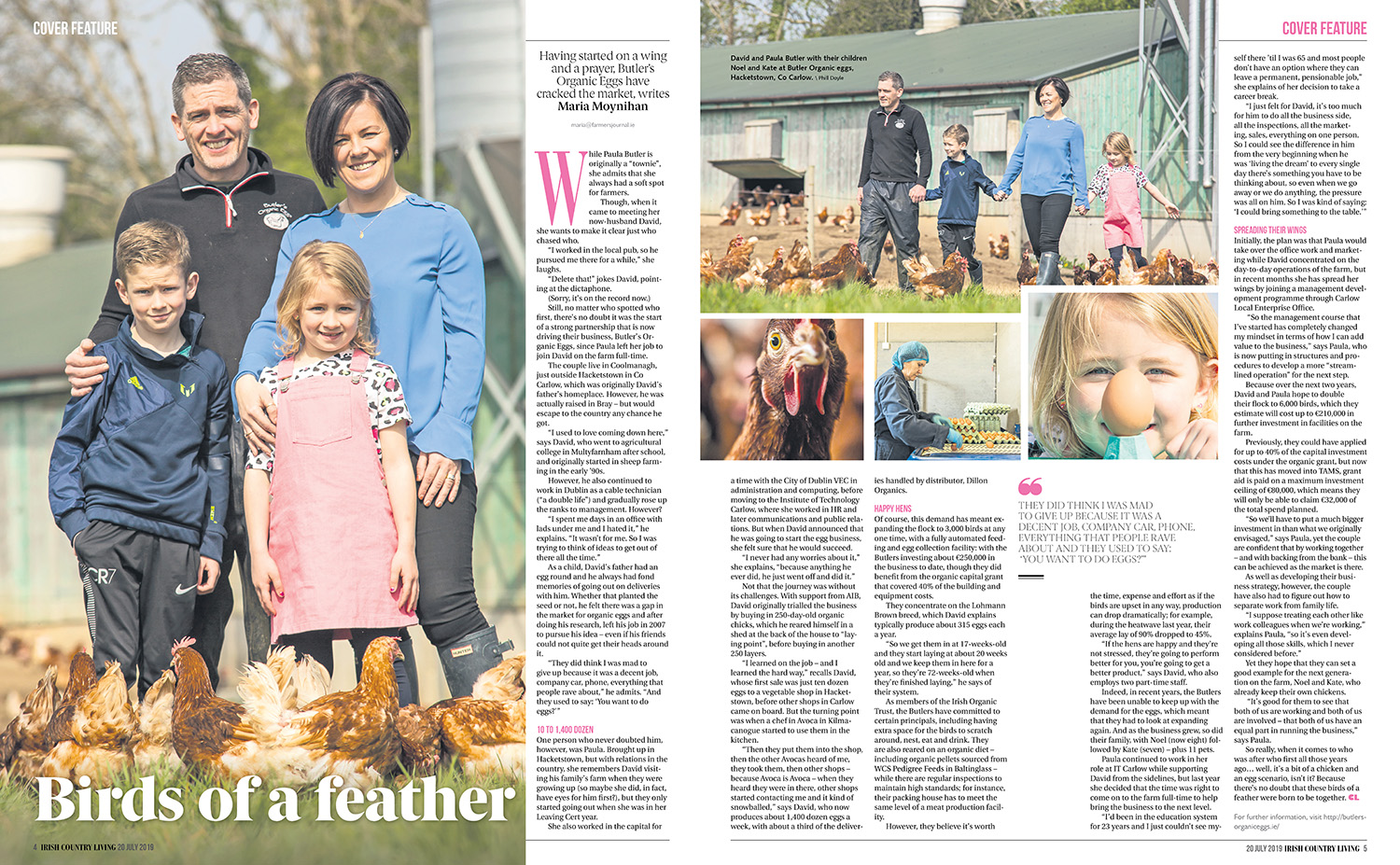 Initially, the plan was that Paula would take over the office work and marketing while David concentrated on the day-to-day operations of the farm, but in recent months she has spread her wings by joining a management development programme through Carlow Local Enterprise Office.

“So the management course that I’ve started has completely changed my mindset in terms of how I can add value to the business,” says Paula, who is now putting in structures and procedures to develop a more “streamlined operation” for the next step.

Because over the next two years, David and Paula hope to double their flock to 6,000 birds, which they estimate will cost up to €210,000 in further investment in facilities on the farm.

Previously, they could have applied for up to 40% of the capital investment costs under the organic grant, but now that this has moved into TAMS, grant aid is paid on a maximum investment ceiling of €80,000, which means they will only be able to claim €32,000 of the total spend planned.

Over the next two years, David and Paula hope to double their flock to 6,000 birds, which they estimate will cost up to €210,000 in further investment in facilities on the farm.

“So we’ll have to put a much bigger investment in than what we originally envisaged,” says Paula, yet the couple are confident that by working together – and with backing from the bank – this can be achieved as the market is there.

As well as developing their business strategy, however, the couple have also had to figure out how to separate work from family life.

“I suppose treating each other like work colleagues when we’re working,” explains Paula, “so it’s even developing all those skills, which I never considered before.”

Yet they hope that they can set a good example for the next generation on the farm, Noel and Kate, who already keep their own chickens.

So really, when it comes to who was after who first all those years ago… well, it’s a bit of a chicken and an egg scenario, isn’t it? Because there’s no doubt that these birds of a feather were born to be together.